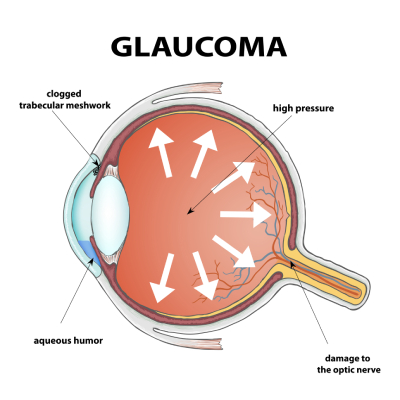 Glaucoma is a group of eye diseases in which an increase in the pressure inside the eye (intraocular pressure or IOP) results in damage to the optic nerve and leads to vision loss.

The vision loss from glaucoma can be mild and may not even be noticeable by the patient. However, sometimes it can progress to severe vision loss. Glaucoma can even lead to total blindness. The rate of disease progression can also vary significantly . Some patients progress very slowly over the course of many years. Others can develop very rapid vision loss in just a few weeks or months.

Glaucoma is often called the sneak thief of sight because by the time a patient develops symptoms of vision loss, there is already significant damage to the optic nerve.

Glaucoma is treated by lowering the intraocular pressure in order to stabilize the optic nerve and prevent the development or progression of vision loss. The treatments can be medical, glaucoma laser, or glaucoma surgery.

Vision loss in glaucoma can be prevented with early diagnosis and proper treatment.Compliance with treatment and regular follow-up examinations are central to glaucoma management. 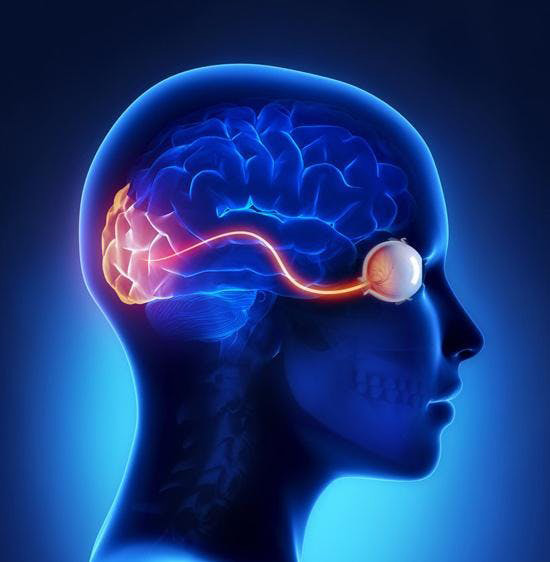 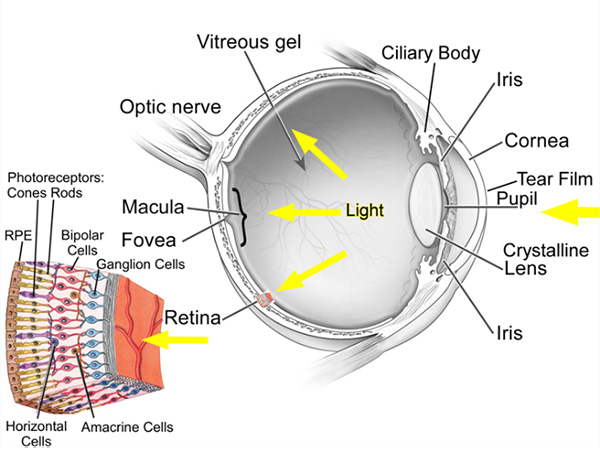 The Eye and Vision

The eye is the organ of sight. It functions to focus incoming light energy, convert it to electro-chemical impulses, and send these impulses to the brain. The retina is the light sensitive film in the back of the eye. Inside specialized cells in the retina, which are called photoreceptors (the rods and cones), the incoming light causes chemical reactions which create the electro-chemical impulses. The photoreceptors are connected to other cells, called retinal ganglion cells. The retinal ganglion cells connect the retina to the brain. The fibers (axons) of the retinal ganglion cells make up the optic nerve in the back of the eye.

While it is the eye that receives light impulses, the actual site of vision is in the brain (specifically, the occipital cortex, located in the back of the skull). Therefore, the visual pathway refers to the entire path that the light stimulus travels, from the point of entry in the eye until it reaches the occipital cortex . Any disease that affects any part of the visual pathway can result in vision loss.

The Structure of the Eye 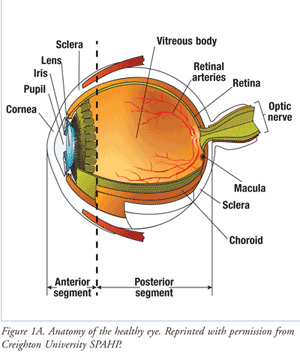 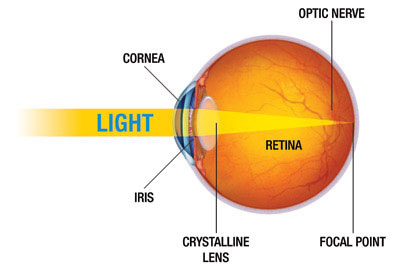 The eyeball needs a proper amount of pressure (the intraocular pressure or IOP) to maintain its shape. The normal IOP is in the range of 10 to 21 mm Hg, with most people falling in the 16 to 20 range. (The unit of eye pressure is millimeters of mercury or mm Hg, the same units as blood pressure. However, eye pressure and blood pressure are unrelated.) As the IOP increases above the normal range, there is a corresponding increase in the risk of vision loss from glaucoma.

The eyeball continuously makes a clear fluid to maintain the eye pressure (called the aqueous humor or simply aqueous.) The aqueous is made by muscle tissue near the front of the eye called the ciliary body. The aqueous then flows through the pupil and filters out through the trabecular meshwork, eventually draining into the venous circulation.

The area where the fluid leaves the eye through the trabecular meshwork is called the drainage angle (iridocorneal angle), because it is located at the base of an angle made by the cornea and iris. Analysis of the drainage angle is performed with gonioscopy.

The IOP can become elevated for many different reasons. In general, when the IOP is too high it is because the aqueous does not drain properly from the eye. The IOP is measured by a test called tonometry. 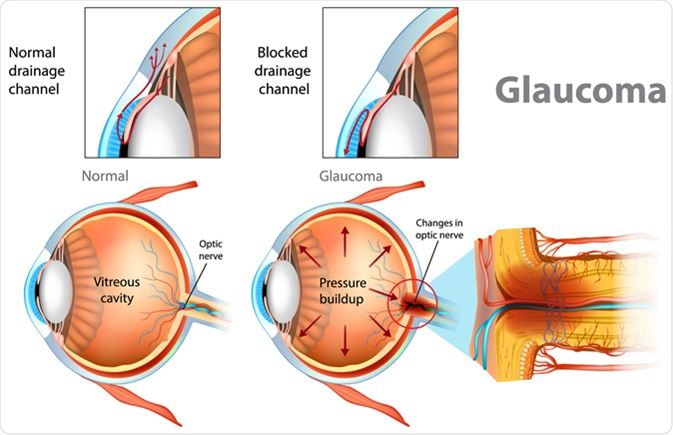 There is no feedback from the optic nerve head to the front of the eye. Therefore, optic nerve damage will continue unless treatment is initiated to lower the IOP. When vision loss develops in glaucoma it is permanent because the retinal ganglion cells do not regenerate and cannot be replaced. 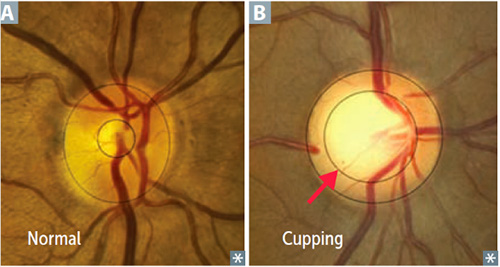 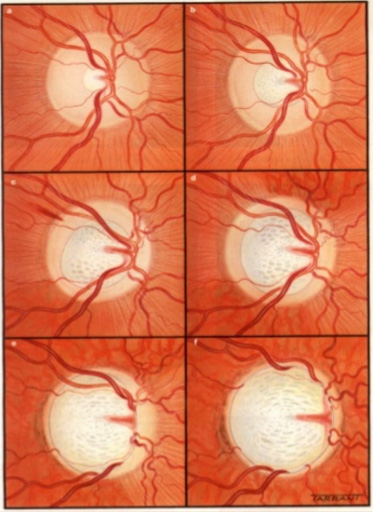 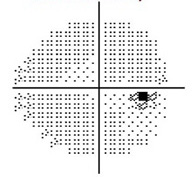 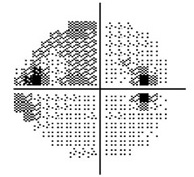 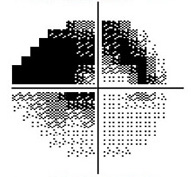 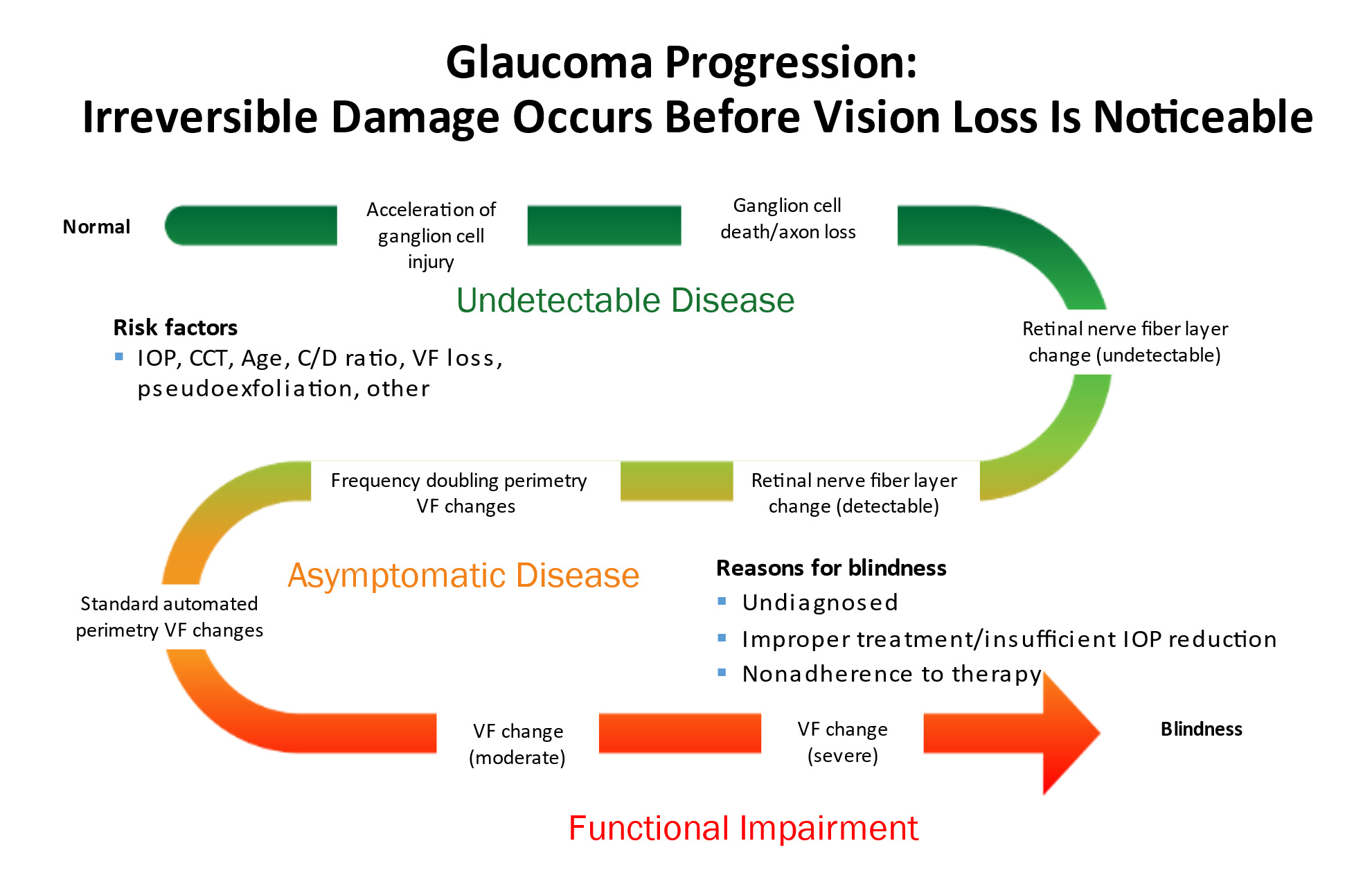 Primary Open Angle Glaucoma, or POAG,is the most common type of glaucoma. This glaucoma usually develops in adulthood. It is causes by a defect in the outflow channel, probably at the level of the trabecular meshwork, such that the aqueous fluid does not drain adequately, and the pressure builds up in the eye. The cause is due ti an intrinsic defect in the eye, and it is not related to any other disease or condition in the body.

Angle Closure Glaucoma results from a narrowing of the angle between the iris and cornea. Angle closure glaucoma can be gradual and chronic, or it can be sudden and acute. In cases of acute angle closure glaucoma, (sometimes called a glaucoma attack, the IOP can become dangerously high, casing severe pain and rapid loss of vision. 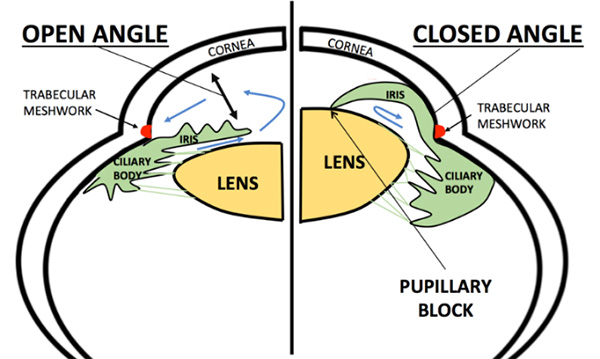 The angle can sometimes be narrow, but not yet fully closed, putting the eye at risk for an angle closure attack. Eyes that are far-sighted (hyperopic) are at increased risk for angle closure glaucoma.

The treatments for angle closure glaucoma include laser iridotomy or lens removal (either as cataract surgery or clear lens extraction). 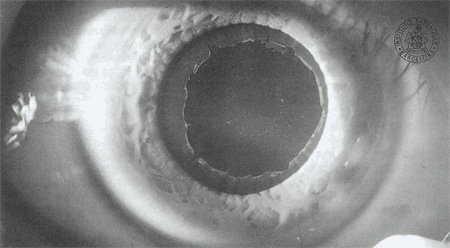 Exfoliation material seen on the surface of the lens, behind the pupil.

Pigmentary glaucoma (PG) is an aggressive form of glaucoma that is often seen in younger people, and those who are near-sighted (myopic). It can develop when patients are in their teens or 20s. It frequently goes undetected until the disease is advanced, since it can require a detailed examination to accurately diagnose, including gonioscopy. Pigmentary glaucoma is caused by a chaffing of the iris by the lens zonules, with the dispersed pigment then clogging the trabecular meshwork. Eventually, enough pigment can be released so that light passes directly though the iris, an effect referred to as transillumination defects. 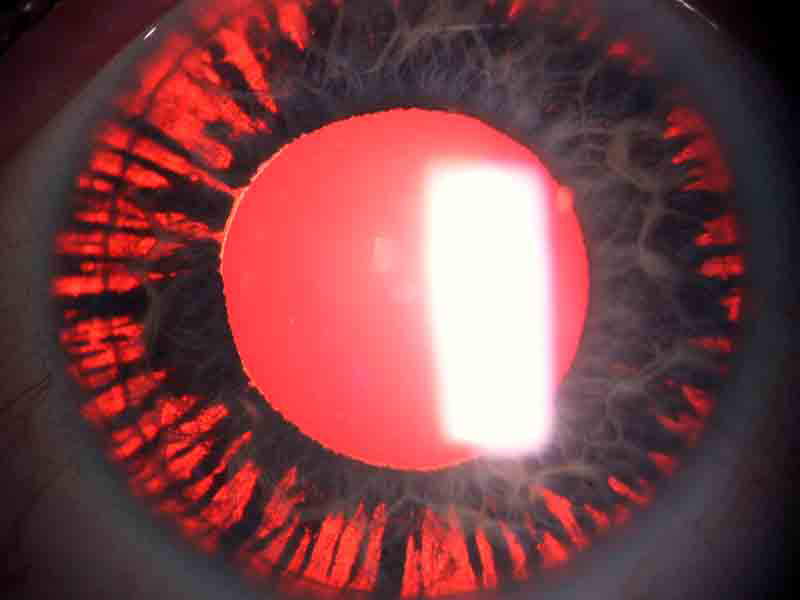 Steroid-induced glaucoma is a common type of secondary glaucoma and can result from the use of many types of steroids, whether taken orally, in inhalers, eye drops, ointments, or creams. The eye pressure can become extremely high after just a few weeks of steroid use. Conditions where steroids are commonly used as treatment include COPD (asthma, emphysema, or chronic bronchitis), arthritis (especially rheumatoid arthritis), inflammatory bowel disease, and others. Steroids that cause glaucoma are also a common cause of cataracts. 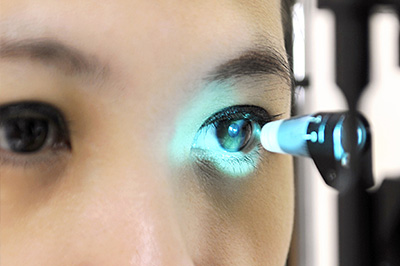