Anatomy of the Eye

The human eye is the organ of sight closely related to the brain and is best compared to a camera. Like a sophisticated camera, the eye has multiple discrete parts which must function together properly to produce clear vision. The function of the eye is to convert light into an electro-chemical signal, which is then transmitted to the brain through the optic nerve. It is in the brain that this signal is converted into “vision.” To illustrate this, we will follow the path that light takes as it travels through the eye and we will discuss the various ocular structures encountered along the path. 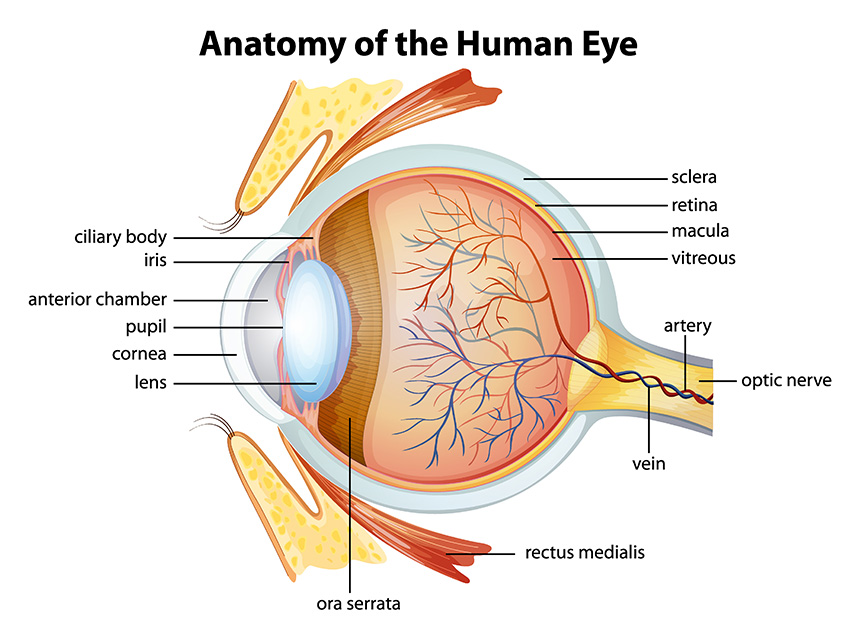 The first surface encountered by a ray of light is the tear film. The eye’s surface must be kept moist at all times. To achieve this, glands in and near the eyelids produce both tears and a special oil, which mix together and coat the eye. This tear film coats the cornea, which normally is the crystal clear window to the eye. Deficiencies in tear production (dry eyes) can impair vision and cause redness or discomfort. Behind the cornea, we enter a space called the anterior chamber, which is filled with fluid called the aqueous. The aqueous is normally clear like water and is responsible for maintaining the pressure of the eye. Disturbances in the production or drainage of the aqueous can result in high pressure in the eye and even glaucoma.

Inside the anterior chamber is the iris. This is the part of the eye that is responsible for one’s eye color. It acts like the diaphragm of a camera, dilating and constricting the pupil to allow more or less light into the eye.

Between the cornea and the iris is a special structure in the anterior chamber called angle of the eye. Aqueous from the eye drains from the anterior chamber and out of the eye through the angle. If the angle becomes damaged or blocked, the eye pressure increases leading to glaucoma. Glaucoma treatments such as laser or surgical implants are aimed at opening or bypassing the angle to return eye pressure to a safe level.

The next structure we encounter is the crystalline lens. The lens is responsible for focusing light onto the retina. It changes shape slightly to allow us to change focus between objects that are near and those that are far. As we age, the lens becomes less flexible and unable to “accommodate” or change focus as well. This is called presbyopia. When a patient becomes presbyopic, they will often need to wear reading glasses or switch to multi-focals. Eventually, the lens loses its original clarity and can become yellowish or cloudy. This is called a cataract and degrades the quality of the image focused on the retina. When the cataract becomes dense enough to interfere with vision, it can be replaced with a clear artificial lens implant during cataract surgery.

Next in our voyage through the eye is the vitreous. This is a jelly–like substance that fills the body of the eye. It is normally clear. In early life, it is firmly attached to the retina behind it. With age, the vitreous becomes more water–like and may detach from the retina. Often, little clumps or strands of the jelly form and cast shadows, which are perceived as “floaters.” While frequently benign, sometimes floaters can be a sign of a more serious condition such as a retinal tear or detachment and should be investigated with a thorough eye examination (see retinal detachment).

Finally, light reaches the retina, a thin tissue lining the innermost wall of the eye. The retina acts much like the film in a camera. The retina responds to light rays hitting it and converts them to electrical/chemical signals carried by the optic nerve to the brain. The outlying parts of the retina are responsible for peripheral vision while the center area, called the macula, is used for fine central vision and color vision. The very center of the macula is called the fovea. It has a very high concentration of special cells called cones, which make it the only part of the retina capable of 20/20 vision. Any disease that affects the macula, such as macular degeneration, will result in a decrease in straight ahead central vision.

Like film, the retina is composed of several layers with different roles. The first layer encountered by light is called the nerve fiber layer. Here, the nerve cells travel from all the parts of the retina to the optic nerve. Under this layer are most of the retinal blood vessels. They are responsible for nourishing the inner parts of the retina. The outermost layer is the photoreceptor layer. The photoreceptor layer, composed of cones for fine and color vision, and rods for vision in dim light, consists of the cells that actually convert light into nerve impulses. There are approximately 120 million rods and 6 million cones in a human retina. Most of the cones are located in the macula. The photoreceptor cells lie on top of a layer of cells called the retinal pigment epithelium or RPE. The RPE is responsible for keeping the photoreceptors healthy and functioning well. Under the RPE is the retina’s second set of blood vessels, which are in a layer called the choroid. The RPE, fed by the blood vessels of the choroid, nourish the photoreceptors.

The optic nerve is the structure which takes the information from the retinas and delivers it to the brain, where this information is interpreted as a visual image. The optic nerve consists of a bundle of about one million nerve fibers. The position in the back of the eye where the nerve enters the globe corresponds to the “blind spot” since there are no rods or cones in this location. Normally, a person does not notice this blind spot because of its off-center location and rapid movements of the eye which allow the brain compensate for this absent information. In glaucoma, the nerve becomes damaged often due to high pressure within the eye. 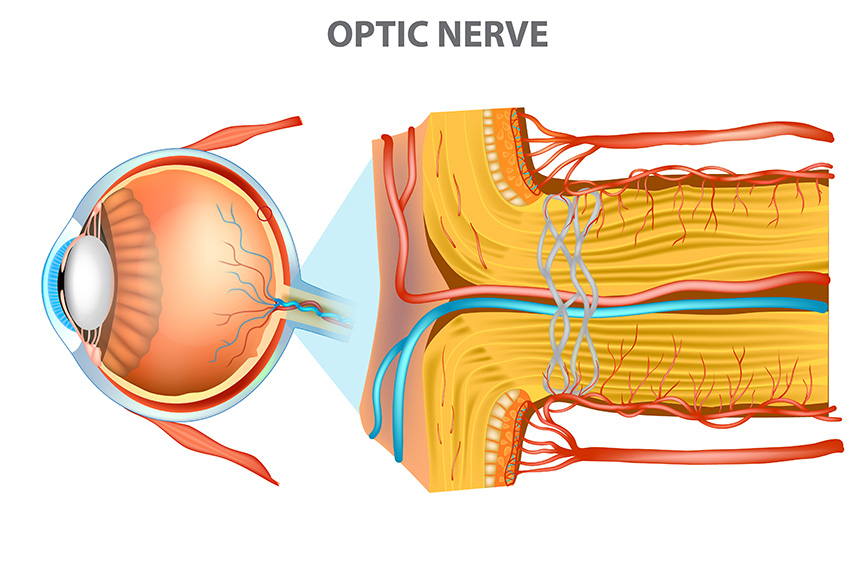 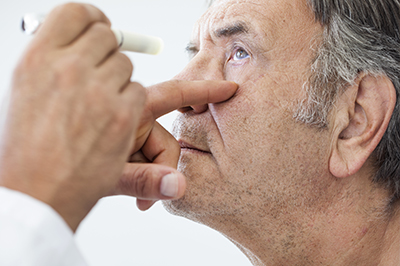